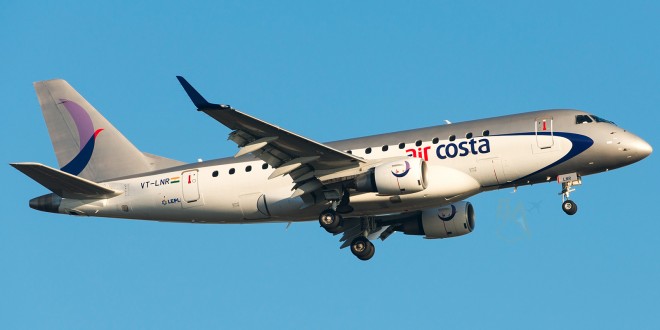 [bsu_note note_color=”#affbcd” text_color=”#070707″ radius=”4″]This analysis is jointly written by (an) external aviation professional(s) and Bangalore Aviation team. The views expressed may not fully reflect those of Bangalore Aviation. The analyst(s) remain anonymous as they are not authorised to place their views publicly.[/bsu_note]

Media reports inform that regional carrier AirCosta has halted operations due to a cash crunch. The aircraft lessor GECAS has held the last two aircraft in the airline’s fleet. This is the second such instance in a span of less than a year, the airline has suspended operations.

We analyse the causes for this shut-down.

While the airline had a fleet of three Embraer jets, the lessor GECAS reclaimed one towards the end of December, thus reducing the fleet down to two aircraft. Net operational aircraft will be a bit lower since this number takes in to account maintenance schedules, pilot staffing and other scheduled reasons which require an aircraft to be taken out of operation).

Air Costa’s network is concentrated in the south of India. Officially its base is Vijayawada, the commercial capital of Andhra Pradesh state post its bifurcation with the new state Telangana, yet the airline operates only one route from Vijayawada. The airline flies to eight destinations with about 20 to 22 flights a day with its current two aircraft. It used to operate about 32 daily flights when it had three aircraft. 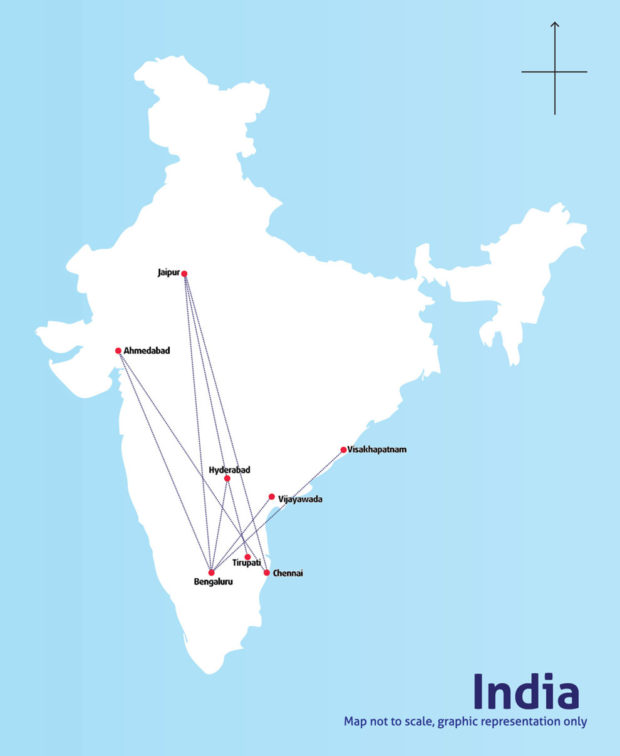 At first glance, it appears Air Costa has developed a good network from a regional demand perspective. However, there are some gaps in this network when studied in detail.

The airline is fragmented. It’s head-quartered in Vijayawada but has only one destination from there. The maintenance is done at Chennai but again is not its strong city. Air Costa has its largest presence in Bangalore, but this is a third largest city in terms of air traffic both passengers and domestic cargo, and this naturally attracts competitors. Bangalore has seen strong growth by market leader IndiGo. The largest private airline in India, Jet Airways, has also developed a focus on the city. AirAsia India has its hub at Kempegowda airport, Bangalore.

All these prevented Air Costa from maintaining any monopoly route which in turn affects its passenger numbers and pricing power. The decline in load-factors with an increase in capacity are testament.

Translated into traffic and financial figures the airline looks as below:

The nature of Air Costa’s order for 50 Embraers (25 E190s + 25 next generation Embraers) is unknown. The traditional mode of sale and leaseback may not be favourable given the lack of liquidity for the regional jet type aircraft in the Indian market. Pilot staffing is another cause for concern. There is no readily available talent pool for the Embraer, and local pilots will naturally gravitate towards larger jets (A320 / B737) (A330 / B787) etc., forcing the airline to induct expensive expat pilots which further impacts costs.

Airlines face unique challenges in cash flow. In many instances, cash is collected up-front for services that will be rendered at a later date. This places stress on cash-flow, and forward sales are a critical contributor for the required cash-flow management. This explains why some airlines conduct fare-sales regularly.

The cash-flow must cover variable costs, fixed costs and then, in an ideal world, the profit margin. Indian aviation is witnessing a challenging change in passenger booking behaviour. Thanks to unbridled growth in capacity, there is a sustained availability of low fares which allows passengers to book flights closer to the actual flight date. This is impacting the cash-flow. Adding to this, ticket prices are down about 15% year on year.

For the larger airlines, falling yields are compensated by higher load factors and more ancillary revenue streams but Air Costa is limited on both fronts. This leads to negative working-capital cycles, forcing the airline to cover its cash shortfall with loans or equity. With renewed public focus on non-performing assets and the Kingfisher Airlines / Dr. Vijay Mallya debacle, banks are wary lending to enterprises where debt is used to fund working capital. This mandates equity injection in to the company. Do the promoters have the funds given the soft trends in the construction industry? We have a neutral to negative outlook.

With the maturing of the Indian aviation market, there is certainly space for carriers like Air Costa. Much better planning for challenges along with generating a strong cash-cushion by equally strong non-core revenue streams in addition to ticket revenue, are critical for success. Planners will need to de-risk more rises in fuel prices and potential market slow downs.

A electronics and automotive product management, marketing and branding expert, he was awarded a silver medal at the Lockheed Martin innovation competition 2010. He is ranked 6th on Mashable's list of aviation pros on Twitter and in addition to Bangalore Aviation, he has contributed to leading publications like Aviation Week, Conde Nast Traveller India, The Economic Times, and The Mint (a Wall Street Journal content partner). He remains a frequent flier and shares the good, the bad, and the ugly about the Indian aviation industry without fear or favour.
@BLRAviation
Previous Lufthansa to operate its new Airbus A350 on Mumbai Munich route
Next Boeing receives FAA certificate for MAX 8, rolls out MAX 9