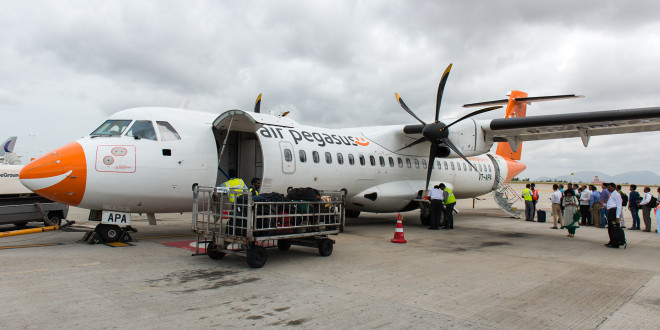 Bangalore based regional airline, Air Pegasus, has issued a statement it has entered into a strategic partnership with start-up airline Flyeasy to revive its operations from March 1, 2017. The airline had suspended operations on June 27, 2016, and the regulator the Director General of Civil Aviation (DGCA) had suspended the airline’s operator’s permit in November last year.

The statement goes on to claim that Air Pegasus will induct of 24 aircraft in the next four years out of which 6 will be inducted this year”. One would assume they mean calendar year, as the financial year ends on March 31.

“Air Pegasus will continue as a regional airline operating in tier 2 and tier 3 cities while Flyeasy airlines will operate as a Pan India operator with all Airbus fleet and will have a commercial launch on May 2017”, said Mr Shyson Thomas, the Managing Director of Air Pegasus.

“We intend to build a strong network with Flyeasy operating into long thin routes and Air Pegasus connecting to tier 2 and 3 cities concentrating on the south initially “. Said Mr Rajesh Ebrahim the Managing Director of Flyeasy. “strategic partnerships and codeshares will be the future of Indian aviation and I feel that we have moved in the right direction” he added.

A electronics and automotive product management, marketing and branding expert, he was awarded a silver medal at the Lockheed Martin innovation competition 2010. He is ranked 6th on Mashable's list of aviation pros on Twitter and in addition to Bangalore Aviation, he has contributed to leading publications like Aviation Week, Conde Nast Traveller India, The Economic Times, and The Mint (a Wall Street Journal content partner). He remains a frequent flier and shares the good, the bad, and the ugly about the Indian aviation industry without fear or favour.
@BLRAviation
Previous Indigo fleet reaches 125 Airbus A320’s
Next Spicejet scores highest On Time Performance at Delhi

Bangalore based Air Pegasus has added a third ATR 72-500 to it’s fleet. The airline …