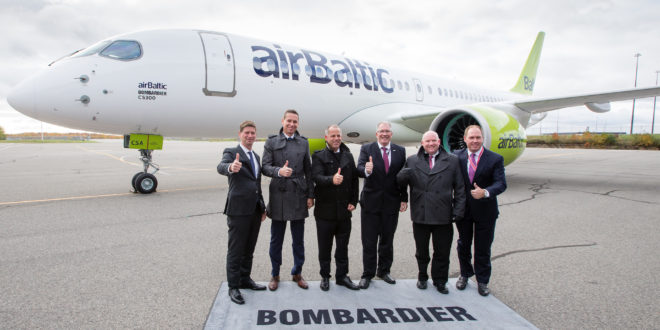 Canadian airframer, Bombardier has delivered it’s first CS300 aircraft to the launch customer, Latvian flag carrier AirBaltic. The carrier will launch its first CS300 flight from Riga to Amsterdam on 14 December. The CS300 will replace the carrier’s aging Boeing 737-300 and -500 aircraft and join it’s existing fleet of 12 Q400’s.

The CS300 is the larger variant in Bombardier’s C Series family of aircraft. The smaller CS100 entered service five months ago with Swiss airlines. The CS100 and CS300 have a common type rating and feature a 99% part commonality. Both aircraft are powered by Pratt & Whitney PW1500G geared turbofan engines.

“We are thrilled to be taking home the first CS300 aircraft – the newest member of the most innovative and technologically advanced family of airliners in the world, With its longer range capabilities, lower fuel burn and reduced noise emissions compared to other airliners in its segment, the CS300 aircraft will enable airBaltic to open new routes and connect people all across Europe, while offering passengers an unparalleled in-flight experience. I would like to congratulate the entire Bombardier team; we are proud to collaborate with you on this great achievement”

“The delivery of the first CS300 aircraft is a major milestone and is the culmination of dedicated hard work and collaboration by thousands of employees, partners and suppliers. I congratulate the entire team for their commitment to the C Series aircraft program and for their perseverance in making this day possible,”

Till date Bombardier has been able to deliver only four CSeries aircraft, which includes three CS100 aircraft to Swiss. The manufacturer has been forced to reduce it’s production by half it’s original target due to delays in supply of the Pratt & Whitney engines.

A frequent flyer for both work and pleasure - Vedant has held elite status on many of the major alliances and airlines. Also an avid aviation photographer, his pictures have been published in and on the covers of many international publications.
@TheVedic
Previous In pictures: Airbus A350-1000 completes maiden flight
Next Jet Airways leverages partnerships to broaden global network