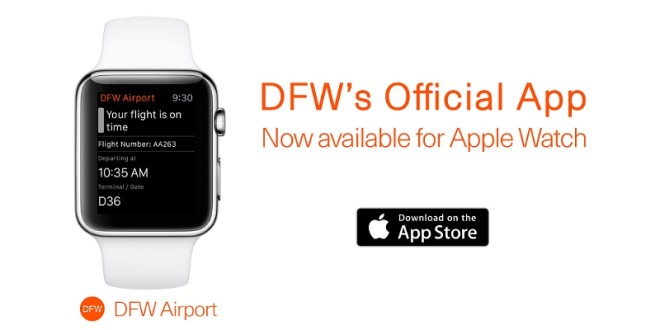 Dallas Fort Worth international airport (DFW) the hub of American Airlines and one of the largest airports in the world, became the first airport in the United States to launch an app on the Apple Watch platform.

The DFW Apple Watch app, provides flight information, gate information and notifications on the Apple Watch after it is synced with the DFW Mobile App on a smartphone. The mobile app was also updated to include six additional languages including Korean, Portuguese, Japanese, Spanish, Simplified Chinese, and Traditional Chinese.

Sean Donohue, chief executive officer of DFW Airport said the apps are meant to provide real-time information on flights, gates, parking availability, services, and weather to the smart-phone carrying passengers which comprise over 90% of all travellers at the airport.

The airport has already invested in technology to automate passport control, finding parking slots, and a patented way-finding touch-screen system to guide passengers to various services, restaurants, and shops. The airport also offers free Wi-Fi in partnership with AT&T.

A electronics and automotive product management, marketing and branding expert, he was awarded a silver medal at the Lockheed Martin innovation competition 2010. He is ranked 6th on Mashable's list of aviation pros on Twitter and in addition to Bangalore Aviation, he has contributed to leading publications like Aviation Week, Conde Nast Traveller India, The Economic Times, and The Mint (a Wall Street Journal content partner). He remains a frequent flier and shares the good, the bad, and the ugly about the Indian aviation industry without fear or favour.
@BLRAviation
Previous Jet Airways signs code-share agreement with Korean Air
Next IndiGo to receive three A320neos in March. Will receive 24 by March 2017