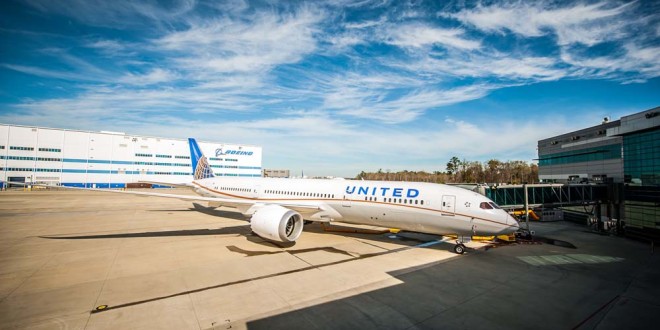 American airframer Boeing has delivered the first 787-9 Dreamliner assembled at its North Charleston, South Carolina, facility to United Airlines. The airplane also marks a milestone for the 787 program as the 250th Dreamliner to be delivered.

“In 2012, we delivered our first South Carolina-built 787-8, and less than three years later, we’re celebrating another significant milestone – our first 787-9 delivery, This is an incredible achievement for Boeing, and I’m proud to be a member of the Boeing South Carolina team.”

In the first quarter of 2013, the Charleston plant began fabrication, assembly and integration of the aft and mid fuselage sections for the first Boeing 787-9 and delivered them to Everett Final Assembly. In November 2014, work began on the first Charleston-built 787-9 when the first aft and mid sections were delivered to Boeing South Carolina Final Assembly. The aircraft rolled out to the flight line in January 2015 and completed its first flight last month.

“Our customers have told us they love flying on the Dreamliner, and we’re excited to mark yet another first for the aircraft with this delivery from Boeing South Carolina, We were the first North American carrier to fly the 787-8 in September 2012 and the first to fly 787-9s in September 2014. The Dreamliners have allowed us to fly longer distances with greater fuel efficiency and open new direct routes such as Los Angeles to Melbourne, while providing our customers and employees with a more comfortable flying experience.”

A frequent flyer for both work and pleasure - Vedant has held elite status on many of the major alliances and airlines. Also an avid aviation photographer, his pictures have been published in and on the covers of many international publications.
@TheVedic
Previous Show minimum government, maximum governance in India’s next VIP aircraft
Next Boeing 747-8i receives 330 minute ETOPS approval