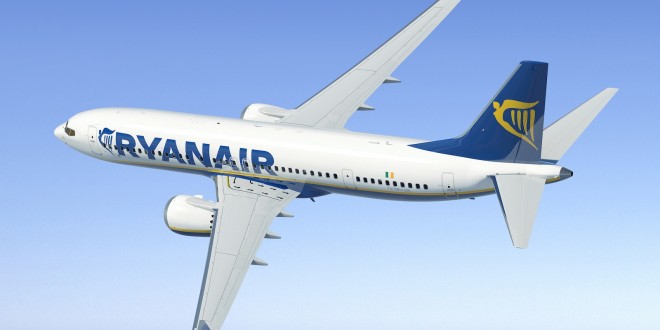 Michael O’Leary’s pursuit of a high density Boeing 737 finally came to fruition. US airframer Boeing has launched the 200 seat version of the 737 MAX 8 with a 100 airplane commitment from Ryanair, the Irish ultra-low cost carrier. Ryanair will also have options to purchase up to another 100 737 MAX 200 as the aircraft is being called.

In July Airbus introduce a concept called Airbus Cabin Flex (ACF) and increased the seating capacity of its A320neo to 189 seats, the same as the 737 MAX 8. ACF uses new slim seats which decreases seat pitch to 28 inches, and ultra-slim lavatories which moves the current two rear toilets in to half of the rear galley space (the cabin layout image of the A321neo below gives a good idea). Boeing which steadfastly denied any plans for a high density MAX 8, announced the MAX 200 two weeks later at the Farnborough Air Show 2014.

Relying on its extra 2.2 metres of fuselage length compared to the A320neo, the MAX 200 uses a rear mid-exit door just like the -900ER and MAX 9 to increase the emergency exit limit.

Using ACF, Airbus also increased its A321neo seating up 20 to 240 seats by shifting one the mid-exit doors to rear of the plane and using the new lavatories in place of half the galley.

We do not think Boeing will respond to the 240 seater A321neo, at least in the near future. The CFM LEAP engine which will power the MAX family is close to its limit with the current 220 seat MAX 9. It is doubtful Boeing will be able to meet field performance issues if the seat capacity is raised by 20 seats. Also, 200 seats is just about the sweet spot of the narrow body single aisle jet family for the foreseeable future. 240 seats is just a little over the top. Further unlike Boeing who had an well agitated Irishman on its head demanding the MAX 200, Airbus does not have any over-anxious customer for its ultra-high density configuration A320 or A321.