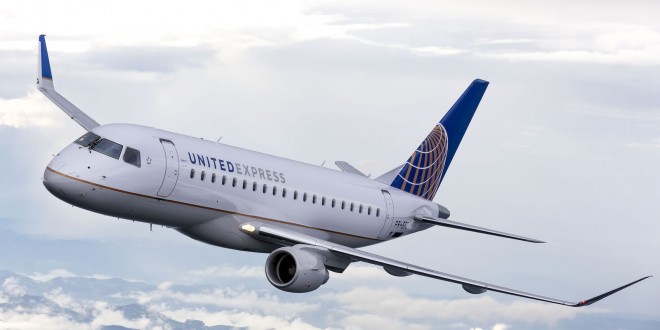 Embraer S.A. and Republic Airways Holdings Inc., the world’s largest operator of E-Jets, announced a contract for the sale and purchase of 50 firm E175 jets. The value of order is estimated at USD 2.1 billion, based on 2014 list prices. The aircraft will be operated for United Airlines under the United Express brand. Deliveries are scheduled to begin in the third quarter of 2015 and extend until 2017.

This contract is in addition to the order Republic placed in January 2013 for 47 firm and 47 option E175s – 34 of which have already been delivered. In addition to the new order, Republic maintains 32 options for E175s.

This transaction is tied to the transfer of Q400 turboprop airplanes currently operated by Republic Airlines to UK carrier Flybe. As part of the agreement Flybe and Embraer have agreed to reduce by 20 the outstanding order for 24 E175’s the airline has on order. Therefore, the net increase to Embraer’s order book will be 30 E175 jets.

“Embraer has a long history of working with us to meet our partners’ needs, We look forward to working with Embraer, United and Flybe to complete this fleet transition.”

A frequent flyer for both work and pleasure - Vedant has held elite status on many of the major alliances and airlines. Also an avid aviation photographer, his pictures have been published in and on the covers of many international publications.
@TheVedic
Previous Air Seycelles to launch flights to Mumbai
Next Avolon places an order for Boeing 787-9 Dreamliners and 737 MAX 9s