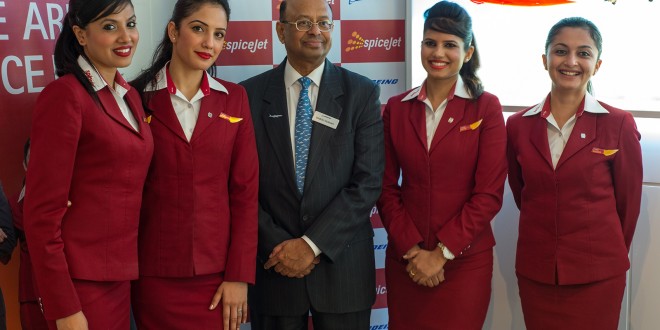 Boeing Vice President Dinesh Keskar with Spicejet cabin crew after signing an agreement for Spicejet's purchase of the 737 MAX.

The recent airshow at Dubai saw commercial airlines place aircraft orders in excess of $206 billion. This dollar value is greater than the total tax collection of the Indian Government for the last fiscal year. While the ordered airplanes start generating cash for airlines only after being put in to service, the airlines have to commence payments on these aircraft right from the time they sign the confirmed order contract all the way up to delivery.

This begs the question; given the low airline profitability in general and the large amounts of funds required for such orders, how are these orders financed?

PDPs commence from the moment a confirmed order contract is signed. Most buyers, whether an airline or leasing company, pay one percent of the list price of the aircraft along with the confirmed order. Further payments are made starting from about two years before till the aircraft is delivered, by which time the full cost of the aircraft is paid. While upfront cash and loans are an option, airlines are increasingly making use of PDP financing. With PDP financing airlines use debt as opposed to equity. That is, the airline is borrowing money to fund the payments rather than using its own cash, which consequently helps with better levels of working capital. PDPs can be financed up to the entire aircraft cost up to delivery, or a portion of the costs, with the airline paying the balance.

Benefits of PDPs accrue to both the airline and the financiers. These are summarised in the table below:

PDP financing is fairly complex and include a legal framework in order to address multiple scenarios. The lender may finance the total or a portion of the PDPs. At times, this may involve setting up a credit line from which the borrower (the airline) will make draw-downs as and when payments come due.

To simplify this, one can envision the PDP as essentially a secured loan. Therefore interest is payable throughout the term and the principal payable at the end (which is the delivery of the aircraft). The lender gets the first right on the aircraft i.e. a lien, very much like an individual finances a car.

There are at a minimum three parties to the PDP agreement – the manufacturer, the lender and the borrower. Each party in the PDP looks to minimize risk and this is done in the following way:

While overall agreements are complex, some of the key elements of PDP financing are:

Though the PDP finance is backed by an asset (the airplane), some banks argue that this is not a secured financing as the collateral is actually the lien on the asset. In some countries such as India, banks do not consider an aircraft to be an asset thus the lending is arguably without collateral.

On average PDPs are in the range of 20% – 30% of the manufacturers list price. Some PDP financings are highlighted below:

The case against PDP financing

Finally, some regulators question PDP deals and not everyone agrees that these are asset backed loans (which consequently creates challenges complying with the Basel II norms).

This is the first in a series of articles that will address and attempt to explain some of the business, compliance and regulatory issues of the airline industry. Please share your thoughts on the article itself and whether you would like to see more articles like this. Lastly, Bangalore Aviation requests you to join us in welcoming Satyendra Pandey as a contributor to our site.

Satyendra Pandey is an India market expert and has held a variety of roles across aviation. An author and a certified pilot, his most recent book is titled: Dissonant dispatches: Indian aviation’s emergent flightpath.
@spandey16
Previous Through the lens: The Frecce Tricolori
Next First Airbus A320neo progresses towards first flight, performs taxi tests