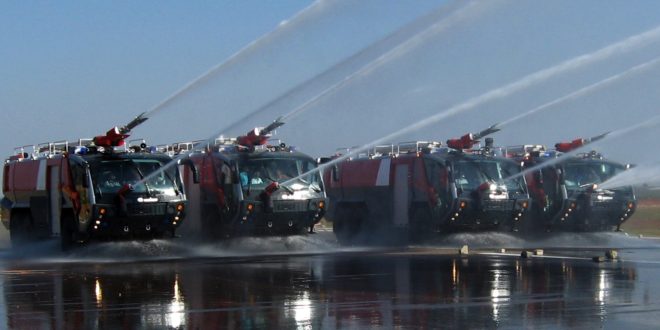 The recent crash of Asiana Airlines flight OZ-214 at San Francisco International airport showcased the quick and heroic efforts of both the airport’s emergency fire and rescue services and the cabin crew. Praise has flowed to both of these sets of people for their actions which resulted in minimal loss of life and injuries.

There are many acronyms given to this specialised fire-fighting service. In the United Kingdom it is RFFS (Rescue and Fire Fighting Services), in India and the United States it is ARFF (Aircraft Rescue and Fire Fighting), in some parts of the US and in the Philippines it is Crash Fire Rescue (CFR). In this article we’ll follow the Indian standard of ARFF. ARFF is a very specialised category of fire-fighting that involves the response, hazard mitigation, evacuation and rescue of passengers and crew of an aircraft involved in an emergency at, or near, an airport.

For example, ICAO Document 9137-AN/898, Airport Services Manual, Part 1 gives uniform guidance in an effort to provide standardised levels of emergency services, across the world. The respective national civil aviation regulators like the Directorate General of Civil Aviation (DGCA) in India, or the US Federal Aviation Administration (FAA), in turn publish and enforce the rules and requirements.

ARFF normally will respond to all aircraft emergencies within an airport’s boundaries and will also respond to emergencies outside the airport boundaries, typically in a six degree cone from the end of each runway, out to about eight kilometres and there is an defined understanding with the city emergency services on the respective roles and responsibilities to an ‘off-airport’ incident.

All the major airports in India are compliant with ICAO and DGCA norms for emergency services and are audited regularly. By rules if an airport has inadequate or no ARFF cover, it has to close its runways to passenger paying aircraft unless it is an emergency, and even then, use of the airport is at the discretion of the commander of the aircraft.

The trend to modern ARFFs was initiated by the private airports of Bangalore, Hyderabad, New Delhi and Mumbai. Soon after, even the Airports Authority of India (AAI) run airports like Kolkata, Chennai, Ahmedabad, Amritsar, etc., migrated from their vintage Tata-Leyland trucks to modern ARFF stations and equipment.

The size of the ARFF facility at an is determined by the airport’s category rating. The number of fire-stations at the airport are determined by the response time requirement which is detailed in the next section. Due to the number of runways and its sheer size, Delhi’s IGI airport has four fire stations, the maximum in India. Bangalore airport has one station equipped with four Rosenbauer Panthers.

The category of the airport is based on the size of the largest aircraft that lands at the airport and is also tied in to the number of runways. The table below shows how category is determined, and then for each category what is the requirement of fire tenders, water, chemicals, foams, etc.

Bangalore’s airport is single runway and is rated ‘Cat-9’ since it regularly handles flights up to a 747-400 i.e. Code E size. However, since 2012, the airport also regularly handles one daily flight of a Lufthansa Boeing 747-8i which is Code F size, the same as the A380, and this requires the airport to temporarily increase capability to the highest category, ‘Cat-10’, rating for the duration of that one flight as airport spokesperson Anjana Kher-Murray explains [bsu_quote cite=”Anjana Kher-Murray, BIAL”]ARFF scales up to Cat 10 for the period of operations of 747-8 by augmenting additional manpower out of the shifts during this period[/bsu_quote]

Fire is a major risk during any aircraft emergency. With wide-body aircraft now carrying over 300 passengers regularly, the potential of an emergency turning in to a mass casualty has increased in recent years. Keeping the fire risk in mind, safety regulations require an aircraft should have enough exits to be able to evacuate all passengers within 90 seconds.

Similarly, the arrival of the ARFF team(s) at the scene is of paramount importance. In air traffic control (ATC) towers around the world, there are emergency push-buttons within close reach of controllers which set off alarms blaring. The response time norms require ARFF teams to arrive at the scene within two minutes, for ‘on runway’ incidents, and within three minutes for ‘off-runway’ incidents anywhere within the airport perimeter.

This response time requirement has resulted in the development of specialised Airfield Crash Fire Tenders (ACFTs) which can only be described as “super trucks”. Weighing well over 25~30 tons, twice more than a regular road truck, these tenders can accelerate to 100 kmph in under 30 seconds, thanks to special engines developing between 700 BHP to 1,000+ BHP, about the same power as a Formula 1 car. Taking a leaf from the racing cars, these trucks make extensive use of high strength, low weight, composite and fibre-glass parts.

ACFTs are fitted with specialised suspensions that allow them to corner at high speeds like a sports car, go up slopes of over 60 degrees, or travel on a tilted embankment sloped up to 30 degrees. These trucks incorporate latest technology and automation. Forward looking infra-red (FLIR) allowing the fire-fighters to see in complete darkness, whether at night or in the black smoke of a fire, multiple spray nozzles, with individual remote controls, enabling fire-fighters to fight fires from inside the tender cabin, and much much more.

There are many vendors of ACFTs in the world. Rosenbauer of Austria, Iveco of Italy, and Oshkosh of the United States are major players. In India the Rs. 5 Crore Rosenbauer Panther 6×6 (6 wheels driving, 6 wheels total) is the preferred ACFT. At San Francisco Airport the ACFT of choice is the Oshkosh Striker 4500 8×8 which is a bigger and more expensive tender. Scroll down to see a video of the Striker in action at Dallas-Fort Worth International airport.

In addition to the ACFTs, ARFFs and airports have other rescue equipment like high-lift turn-table ladders, ambulances, mobile intensive care units, power and hydraulic rescue tools, and special suits enabling fire-fighters to enter in to fires. Bangalore airport even has inflatable motor-boats just in case the emergency occurs on one the many lakes around the airport.

The airports have triage centres within the airport premises for trauma victims. Bangalore airport has special tie-ups with area hospitals like M.S. Ramaiah and emergency ambulance services to handle large scale trauma events.

Human beings are a critical component of the airport’s ARFF capabilities. At Bangalore Airport, with one ARFF station the team consists of 134 personnel working 24×7 in four watch shifts. Due to multiple runways, the ARFF at Delhi IGI airport has four stations and a significantly bigger team.

Continuous on-going training is a critical part of the ARFF operations. ICAO Annex 14, § 9.2.34 directs that: All rescue and fire fighting personnel shall be properly trained to perform their duties in an efficient manner and shall participate in live fire drills commensurate with the types of aircraft and type of rescue and fire fighting equipment in use at the aerodrome, including pressure-fed fuel fires.

In India, the Airports Authority of India (AAI) operates two ICAO approved training centres in New Delhi and Kolkata which trains ARFF personnel from across the country.

The fire fighters have to know by memory every aspect of the airport, and also the details for every aircraft that operates at the airport. Come an emergency, there is no time to be looking up books and charts. ARFF charts for Airbus aircraft can be downloaded here, and for Boeing aircraft here.

You can read a detailed paper on the various ARFF training methods across the world and their differences here.

In conclusion, we at Bangalore Aviation invite you to travel safely and with confidence. Air travel is the safest means of travel, and the heroes of the ARFF are on duty looking out for you.

If you would like to say thanks to them, post a comment. The PR teams at both BIAL and DIAL read Bangalore Aviation regularly and we are confident they will be happy to carry your compliments to their respective ARFF teams.

A electronics and automotive product management, marketing and branding expert, he was awarded a silver medal at the Lockheed Martin innovation competition 2010. He is ranked 6th on Mashable's list of aviation pros on Twitter and in addition to Bangalore Aviation, he has contributed to leading publications like Aviation Week, Conde Nast Traveller India, The Economic Times, and The Mint (a Wall Street Journal content partner). He remains a frequent flier and shares the good, the bad, and the ugly about the Indian aviation industry without fear or favour.
@BLRAviation
Previous Opinion: After Ethiopian Airlines incident at Heathrow Airport; 787 remains safe
Next Analysis: Emboldened by Etihad deal, Turkish Airlines seeks additional flying rights to India