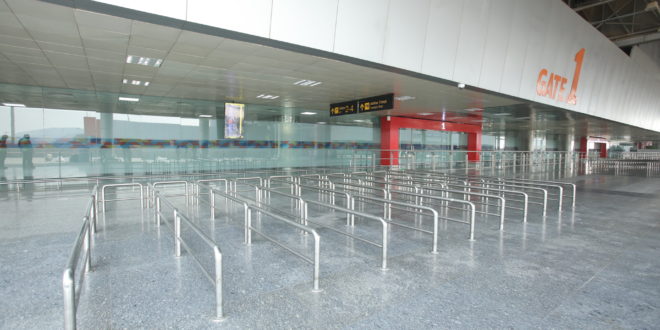 Devesh Agarwal August 28, 2019 Airports, Analysis and Features Comments Off on India’s cities and the need for multi-airport systems

Satyendra Pandey is the co-author of this article.

Airports are strategic assets for any country. As airport impact growth and connectivity impacts that lend themselves to improving tourism, trade, technology, transport and talent. Consider India’s lacklustre trade figures – currently at 1.2 percent of global trade; innovation – where no Indian university lists amongst the top twenty globally; and slowing economic growth.

As policymakers and economists rush to propose solutions, multi-airport systems must be considered. Yet this remains a distant dream. BangaloreAviation presents a comprehensive overview of why this is the case.

All the airports in the country are operating as monopolies, be it public monopolies like the Airports Authority of India, or the private ones like DIAL, MIAL, BIAL, GHIAL, CIAL etc.

Till date, almost all the capacity expansion at Indian airports has focused on the terminals. Ask any Indian airport operator for capacity details and they will promptly recite their terminal capacity numbers along with glossy photographs of their latest construction. Missing is the total capacity of the airport which includes land-side capacity (catering, cargo, office, and crew facilities, car parking, drop-off and pick-up areas etc.), the airside capacity (runway, taxiway, parking bay capacity), in addition to the terminal capacity.

For a truly comprehensive picture, one should also include the capacity of the airspace around the airport to ensure planes can arrive, hold, land, depart and exit in a smooth flow.

Contrary to popular claims, it is the airside and airspace capacity that is most critical to overall airport capacity, and our slot-constrained airports reflect the lack of focus on this crucial aspect.

Added to this, most airports across the country are single-runway operations which provide no resiliency in the event of an emergency. With amazing regularity we see a complete disruption of our national air transportation system if even one runway at a major airport is shut-down.

Read: Only one runway in 50 years. India’s lagging airport expansion.

If existing airports are lagging in ramping up to meet the needs, the government should initiate a determined effort towards encouraging airport competition and restricting monopolies.

Catchment areas are large but only catered to by single airports

Catchment areas are large enough to justify multiple airport systems. Yet, in a testament to lobbies and vested interests multiple airports have not come up. This situation is not sustainable. Failing the development of multiple airports, expanded airport monopolies will continue to impact affordability. This will impact demand and impede the growth of India.

For instance, Bengaluru’s catchment covers Chikaballapura to the North, Hosur to the South, Ramanagara to the Southwest and everything in between. A total population in excess of 12 million+ and growing. Served by only one airport. Ironically, the government agreed to close HAL airport to commercial operation thereby limiting competition and impacting passenger convenience. The current Kempegowda airport will saturate by 2031-2032. Even the existing airport operator agrees the state must start planning for a second airport. To achieve the government’s goal of de-congesting Bengaluru, and develop industry in the Mysuru and Hassan areas, the airport should be ideally located somewhere around the towns of Ramanagara and Channapatna.

This challenge is not limited to Bengaluru. Most metro cities including Mumbai and Delhi also need secondary and tertiary airports to come up. Mumbai has already seen the commissioning of Navi-Mumbai airport but with the same developer for both airports it is simply an extension of the airport monopoly. One only hopes that the same situation does not play out with Jewar airport.

Additionally, airports are economic multipliers. And the very presence of an airport leads to growth in the immediate area. It follows that that multi-airport systems will provide for growth that is not concentrated to one area of the city. Once again using Bengaluru and Delhi as examples it is evident that the airport is clearly benefits residents of certain parts of the city while making for “uneasy-connectivity” for other parts. When layered with hotel capacity growth and other numbers like housing, safety and spending – there is a clear and visible impact.

Multi-airport systems are the need of the hour

Professor Richard de Neufville of MIT, a world leader in airport systems defines a multi-airport system (MAS) as, “a set of two or more significant airports that serve commercial traffic within a metropolitan region.” MAS are critical to the overall economic growth and health of any large metropolis.

Traditionally the argument against having multiple airports was the small number of flyers. In 2005 India saw a national total of 51 million annual domestic passengers. Today, the top three Indian airports handle over 112 million, and this includes the totally saturated Mumbai airport. Delhi is already in the league of the world’s “mega airports”. Bengaluru has seen its annual passenger traffic triple to 32 million in the last decade, and will reach 70 million in the next decade.

Multi-airport “networks” based on choice, convenience and affordability

In aviation jargon there are two types of passengers. O&D and Transit. O&D (origin and destined) are passengers who take-off and land at a particular city. They may use surface transport to reach their ultimate destination within the catchment area. Transit passengers connect through an airport.

Cities with large transit traffic have large hub airports, while cities with higher O&D traffic have multiple smaller airports. In multi-airport cities, passengers tend to choose airports based on matrix of their destination and the nature of the trip (overseas or domestic, business or leisure).

The domestic passenger wants efficient airports that minimise process times, and they do not expect elaborate eating and shopping facilities. The same person on an international business trip would like duty-free shopping, lounges, and restaurants. The leisure segment wants affordable eating options and loathe paying the exorbitant prices for even something basic like a bottle of water.

London has five airports – Heathrow, City, Gatwick, Stanstead and Luton. Heathrow is home to full-service carriers British and foreign and facilitates both O&D and transit traffic. City, despite being the smallest airport, has the highest percentage of business travellers who value its in-city location, compact size, speedy processing, and maximum productivity. Gatwick is the home to ultra-low-cost Easyjet, and has the lowest percentage of business passengers. Stanstead is the home to ultra-low-cost Ryanair, while Luton caters to those living in the north-west suburbs around London. The same person may choose to use City for a European business trip, Heathrow for a trans-continental business trip, and Gatwick or Stanstead for a family vacation. Similarly airlines tend to offer flights from Gatwick to primarily leisure destinations, and from Heathrow, the business destinations.

Why should passengers in India be denied?

The “everyone pays for everything” model is not fit for purpose

The “all-in-one airport” business model of the current crop of Indian airports is driven by everyone paying for everything – whether required or not. The passengers at New Delhi and Mumbai airports pay the same fees, despite a majority of passengers using the low-cost terminals, compared to luxurious full featured new terminals (3 and 2 respectively). Economy-class passengers pay for the lounges they do not use. Airport charges taxis for the “privilege” of picking up passengers. The international traveller pays for improving infrastructure at the domestic terminal. Aircraft pay for landing on their Maximum Take-Off Weight (MTOW) regardless of the actual weight. Virtually every airport in India is under-going some form of construction. Even if it is demolishing something that was just recently constructed or renovated. Return on investment is guaranteed. The list goes on and on, but it is heavily weighted in favour of the monopoly airport operator.

India needs time to catch up with the aviation leading markets, the United States and China, and the success of low-fare airlines shows the price sensitivity of the Indian passenger who is neither expecting, nor willing to pay for, extra features and facilities.

As air travel is becoming more accepted, this “all-in-one” approach is beginning to impede the country’s growth.

How soon will we see multi-airport systems

As the demand continues to grow the current commercial fleet of 500+ aircraft is likely to double within the next 7-10 years. As such, a focus on building multi-airport systems is critical. Multi-airport systems is the way to make airports compete. For demand, for airlines and against each other – thereby driving choice, convenience and affordability.
Simply put: when airports compete, passengers win.

Single airport systems will not only hamper growth but will have other impacts that flow through to the cities they serve.
There are some developments in cities that will lead to a second airport being built. Jewar airport in Noida if planned judiciously can compete with Delhi airport; Navi-Mumbai ideally should compete with the existing Mumbai airport (though unlikely); and Bengaluru certainly should start planning for a second airfield in addition to pushing for the re-opening of HAL. Cities like Kolkata, Chennai and Pune are wanting for airport capacity and additional delays will only hamper the growth prospects for the cities.

It is time for the country to embrace multi-airport systems. They are needed and needed fast. For growth. For affordability. For connectivity.

A electronics and automotive product management, marketing and branding expert, he was awarded a silver medal at the Lockheed Martin innovation competition 2010. He is ranked 6th on Mashable's list of aviation pros on Twitter and in addition to Bangalore Aviation, he has contributed to leading publications like Aviation Week, Conde Nast Traveller India, The Economic Times, and The Mint (a Wall Street Journal content partner). He remains a frequent flier and shares the good, the bad, and the ugly about the Indian aviation industry without fear or favour.
@BLRAviation
Previous The engines that power Indian aviation
Next Ultra-long haul flying: will Qantas succeed?