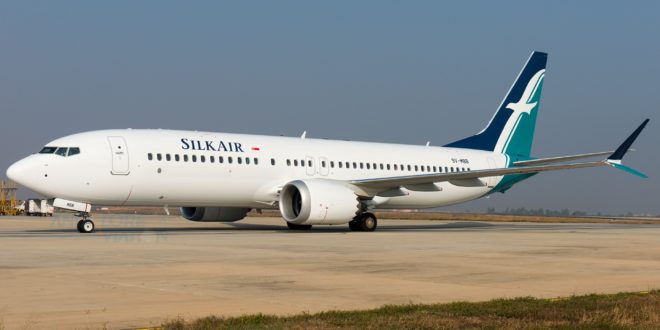 The island nation of Singapore has become the tenth in the list to ground the Boeing 737 MAX 8 aircraft, following the crash of Ethiopian Airlines flight ET302 on March 10, 2019. Countries or airlines across the globe are grounding the aircraft as a precautionary measure till a determination can be made.

The MAX is the new re-engined version of the workhorse 737, the world’s most widely sold passenger jetliner. Till date about Boeing has delivered about 387 737 MAX aircraft from an order book exceeding 5,100.

The Civil Aviation Authority of Singapore (CAAS) ordered the suspension effective 14:00 local (12:00 UTC) today. The country’s sole MAX operator, SilkAir, also the regional subsidiary of Singapore Airlines, said it “is temporarily withdrawing its Boeing 737 MAX 8 fleet from service”. “SilkAir currently has six 737 MAX 8s. The safety of our customers and crew is our highest priority. As of this morning, all six aircraft have been grounded in Singapore and will not be returned to service until further notice. Our 17 Boeing 737-800NGs are not affected.”

SilkAir’s flights to India operated by the Boeing 737-8 MAX aircraft will be now operated by the existing fleet of Boeing 737-800 aircraft. This includes the morning flight to Bangalore. The airline does not anticipate any disruption to its India schedule, and has said “any affected passenger will be informed”. With the MAX constituting about 25% of the SilkAir fleet, we feel there may be disruptions on other regional routes.

If you are travelling on SilkAir, or on an airline from the countries listed below, we urge you to ensure your reservation contains your correct contact information. Verify your information directly on the airline website. There is no need to call the airline as most of them are experiencing heavy call volumes.

India’s Directorate General for Civil Aviation (DGCA) has issued safety instructions for operating the MAX, but has stopped short of grounding the aircraft. The commander of the flight must have a minimum 1,000 hours of flying experience on the predecessor Boeing 737-800NG aircraft, while the co-pilot must have a minimum of 500 hours. Additional directives have also been issued for ground engineers for MAX operated flights.

Jet Airways has grounded its five 737 Max 8 aircraft. The airline said it is “in contact with the manufacturer.”

Spicejet, the country’s largest MAX operator with 13 aircraft has not issued any statement.

GoL airlines has suspended operations of its seven MAX aircraft.

Cayman Airways has suspended operations of its two MAX aircraft.

The country with the highest MAX population, the Civil Aviation Authority of China (CAAC) took action on Monday to ground 85+ aircraft operated by Chinese airlines.

The MAX constitutes a relatively small portion of the fleet for most Chinese carriers, and we do not anticipate any appreciable disruption in operations.

Ethiopian Airlines has suspended operations on its balance four MAX aircraft. ET-AVJ, line number 7243, was the aircraft destroyed in the fatal crash of March 10, 2019, with 149 passengers and eight crew on-board.

The country which is home to the first crash of the Boeing 737 MAX, said it was grounding its 11 MAX jets. 10 are with Lion Air and one with national carrier Garuda. Inspections of the aircraft would start on Tuesday and the planes would remain grounded until they were cleared by safety regulators, Director-General of Air Transport Polana Pramesti told reporters.

Regulators have ordered suspension of the two MAX aircraft with the country’s Eastar Airlines, pending inspection.

Aeromexico has expressed “confidence” its MAX but has temporarily grounded the six aircraft in its fleet.

External reports are drawing similarities between this accident and the Lion Air Flight 610 accident on October 29, 2018. However, this investigation has just begun and to date we have not been provided data to draw any conclusions or take any actions.

The United States has a MAX population of 74 aircraft.

A electronics and automotive product management, marketing and branding expert, he was awarded a silver medal at the Lockheed Martin innovation competition 2010. He is ranked 6th on Mashable's list of aviation pros on Twitter and in addition to Bangalore Aviation, he has contributed to leading publications like Aviation Week, Conde Nast Traveller India, The Economic Times, and The Mint (a Wall Street Journal content partner). He remains a frequent flier and shares the good, the bad, and the ugly about the Indian aviation industry without fear or favour.
@BLRAviation
Previous New Charter on rights of air passengers in case of flight cancellations or delays
Next Boeing orders and deliveries – February 2019