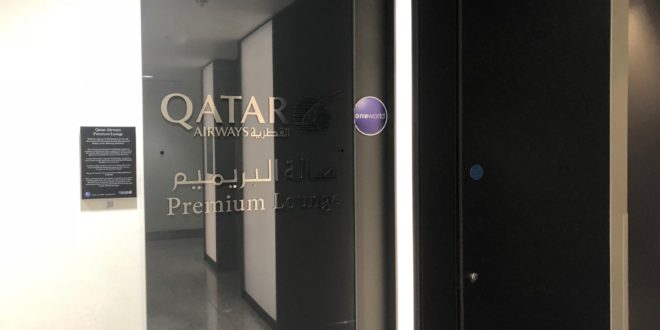 The entrance to the Qatar Lounge.

Despite having flown Qatar multiple times out of the EU before, this was the first time I was flying them directly out of London. My original itinerary had be taking a mid day flight to be followed by a stopover in Doha.

Unfortunately the night before, I had to make a last minute change to get back to Bangalore a few days earlier. The change threw my perfectly curated flights on the QSuite out the window and meant that I would be flying during the world cup.

I got to the airport about two hours before my flight and quickly got to the check in counter. Unfortunately due to the last minute change, I was only able to block a center seat for this flight. However on asking at the counter, the agent spent near ten minutes checking on her system and calling another desk, she offered me the last row window seat which was originally blocked.

After getting my boarding passes, I headed to security. Qatar operates out of terminal 4 in Heathrow, which is without doubt my least favorite of all the Heathrow terminals. I have always found that security lines even in fast track take a long time here (just like T5). Luckily this time, I got through in under five minutes.

There is a board showing where to hang a left for the Qatar lounge and towards the end of the corridor is the entrance to the lounge.

The lounge is only accessible to passengers flying first or business class on Qatar flights or on OneWorld flights. It is not accessible to status holders in flying economy.

The entrance to the lounge is under a candle chandelier. There is no desk when you enter the lounge, an agent by the door checks your boarding card and lets you in. After checking my boarding card the agent asked me if I had been to this lounge before. When I said I hadn’t, she explained the amenities in the lounge and offered to walk me around. I thanked her and told her that I would find my way.

As you enter the lounge the central area there is a beautiful fountain with some seating around it. Along one side of the lounge are a series of incredibly comfortable couches and some more family or group oriented seating with a TV towards the back of the lounge.

There is also a business center towards the left from the central area, the lounge also has showers.

Being an morning flight, I had not eaten before getting to the airport. So I headed straight to the dining area. The beginning of the dinning area has a round table, half of which is a buffet. The other half of the circle is a bar.

The tables in the front area are large white four seater tables with a olive tree planted through the center. Towards the back of the dining area is a more traditional sit down dinning room.

As soon as I took my seat, a server came brought me the menu and asked me what I would like to drink. I ordered a coffee and went through the menu.

My coffee was served with a couple of cookies and the stewardess took my order. Following which I went to get some stuff off the buffet. The buffet is a bit confusing, I’m not sure if it is designed to be self service or not. But as soon as I picked up a plate, the stewardess asked me to point out anything I would like and that it would be bought to the table.

Self service or not, the buffet selection for the breakfast was extensive and I believe it is even a little more elaborate for lunch and dinner.

My order from the buffet was bought to the table, followed by my order off the menu. All the food, I ate at the lounge was good.

Following breakfast, I tried to finish some work. One side of the lounge are windows, unfortunately due to the location of the lounge and T4 in general, there isn’t much to see unless an aircraft taxis over to the few gates at the back of the terminal.

When our flight was ready for boarding, an agent came over to each area and softly announced that the flight was ready to board. There was no loud announcement, so as not to disturb passengers on other flights in the lounge.

The Qatar lounge at Heathrow is great. A beautiful space with good food, facilities and seating. Definitely one of my favorite lounges.

A frequent flyer for both work and pleasure - Vedant has held elite status on many of the major alliances and airlines. Also an avid aviation photographer, his pictures have been published in and on the covers of many international publications.
@TheVedic
Previous Route transfers between Scoot, SilkAir, and Singapore Airlines to affect India
Next Jet Airways ends lounge access for Gold and Platinum members