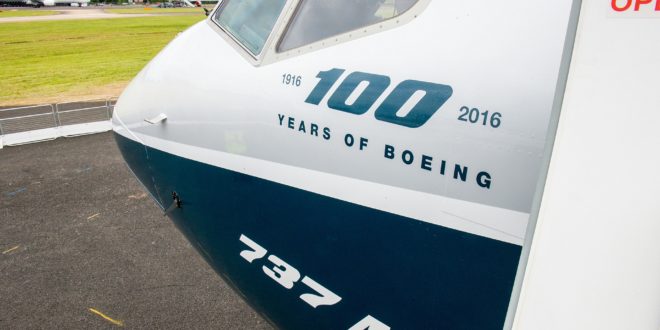 American airframer Boeing has set a new record for number of aircraft delivered in a year by surpassing it’s 2015 record of 762 deliveries by one. The company also grew it’s order backlog to a record 5,864 aircraft.

The order backlog which equates to around seven years of production was spurred by a 35% increase in 737 orders from 550 last year to 745 orders this year.

The 737 program also raised it’s production to 47 airplanes a month during the year contributing to a record 529 deliveries, including 74 of the MAX variety.

Kevin McAllister, President & CEO, Boeing Commercial Airplanes
“The record-setting performance is a testament to our employees and supplier partners who continue to innovate new ways to design, build and deliver the most fuel-efficient airplanes to customers around the world, The strong sales activity reflects continuing strong demand for the 737 MAX family, including the ultra-efficient MAX 10 variant that we launched last year, and the market’s increasing preference for Boeing’s family of twin-aisle jets, Our planned production increases over the coming years are designed to satisfy this robust demand.”

The table shows Boeing’s orders, deliveries and backlogs at the end of 2017:

A frequent flyer for both work and pleasure - Vedant has held elite status on many of the major alliances and airlines. Also an avid aviation photographer, his pictures have been published in and on the covers of many international publications.
@TheVedic
Previous Airbus rolls out first A321neo ACF (Airbus Cabin Flex). Seats up to 240
Next To attract buyers Government allows 49% foreign investment in Air India