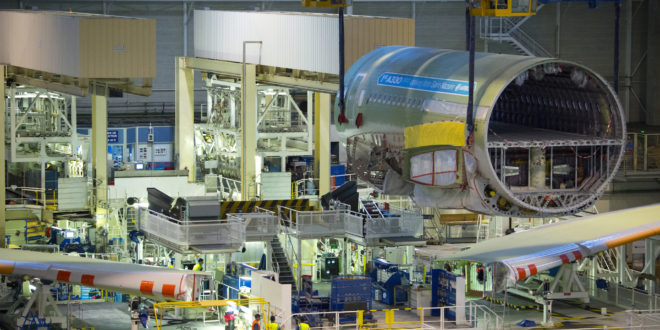 European airframer Airbus has begun final assembly of its first A330neo at its final assembly line in Toulouse, France with the joining of the aircraft’s wings to the centre fuselage at station 40.

According to Airbus, both the A330-800 and -900 feature A350-inspired wing with Sharklet wingtips, the new AirSpace by Airbus cabin and will reduce fuel consumption by 14 per cent per seat over the current A330 models. The A330neo will be exclusively powered by Rolls-Royce Trent 7000 engines.

“We have started with a very tight development schedule and are today right on time,” says Odile Jubécourt, Airbus Head of the A330neo programme. “I am happy to say we are in good shape to meet the high standards of maturity and reliability our customers expect from us and I want to thank the teams for this outstanding achievement.”

A frequent flyer for both work and pleasure - Vedant has held elite status on many of the major alliances and airlines. Also an avid aviation photographer, his pictures have been published in and on the covers of many international publications.
@TheVedic
Previous Video: Boeing 737 MAX 8 take-off at Dallas Lovefield airport
Next Jet Airways expands Jetscreen in-flight entertainment via WiFi to 14 737s