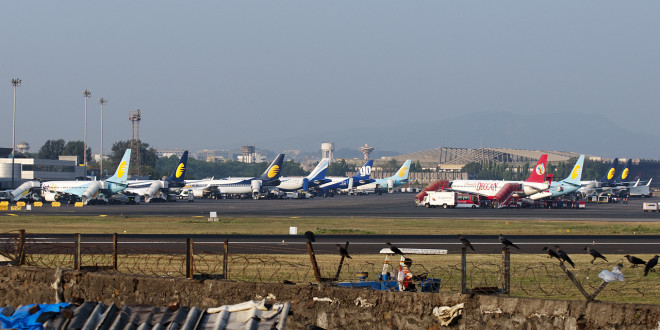 As part of a dramatic overall liberalisation, the Indian government will allow 100% foreign direct investment in domestic airlines. At present the limit is 49%. However, the caveat is that the 49% is automatic approval while the 100% is automatic for non-resident Indians (NRIs) and with government approval for others. Foreign airlines remain limited investing 49% in Indian companies operating an airline.

The government has also announced FDI beyond 74% in brownfield airports like Mumbai and New Delhi will be permitted via “taking permission from the government” route. This allows for the current investors GMR and GVK to sell part of their equity in these two airports to relieve their massive debt burdens.

From the press information bureau (PIB) of the government of India, the press release
5. Civil Aviation Sector

(iii) As per the present FDI policy, foreign investment up to 49% is allowed under automatic route in Scheduled Air Transport Service/ Domestic Scheduled Passenger Airline and regional Air Transport Service. It has now been decided to raise this limit to 100%, with FDI up to 49% permitted under automatic route and FDI beyond 49% through Government approval. For NRIs, 100% FDI will continue to be allowed under automatic route. However, foreign airlines would continue to be allowed to invest in capital of Indian companies operating scheduled and non-scheduled air-transport services up to the limit of 49% of their paid up capital and subject to the laid down conditions in the existing policy

With this announcement the possibility now exists that a foreign airline can form an Indian joint venture along with its holding company, or an investment or private equity firm, and start an airline in India, without involving itself with a local Indian airline partner. An outright buyout of an existing airline under a similar joint venture holding, is also possible. Do we see Mubadala joining up with Etihad or a Temasek joining up with Singapore Airlines? While not likely, it is possible.

However, this announcement fails to fully address the requirements of effective control remaining with Indian citizens, etc, that the 100% FDI will need to comply with.

A hat-tip to a planner from the UK

A electronics and automotive product management, marketing and branding expert, he was awarded a silver medal at the Lockheed Martin innovation competition 2010. He is ranked 6th on Mashable's list of aviation pros on Twitter and in addition to Bangalore Aviation, he has contributed to leading publications like Aviation Week, Conde Nast Traveller India, The Economic Times, and The Mint (a Wall Street Journal content partner). He remains a frequent flier and shares the good, the bad, and the ugly about the Indian aviation industry without fear or favour.
@BLRAviation
Previous Singapore Airlines rejigs US operations. To start San Francisco non-stop.
Next Video: Singapore Airlines Boeing 777 wing catches fire after landing. All safe.